California’s commercial salmon season begins Friday for the coast from Pigeon Point (San Mateo County) to the southern border, which means Bay Area residents are potentially only days away from seeing wild king salmon back in local markets.

Full article from the San Francisco Chronicle can be found here.

Early signs indicate a bountiful year for salmon catches in 2020. There are more than 470,000 adult salmon off the Bay Area coast this season, according to recent scientific data. In 2019, there were almost 100,000 fewer fish along the coast, and many fishermen called last year the biggest salmon season in a decade.

But catching fish is only one aspect of how the commercial season functions. And since the coronavirus crisis has touched every aspect of California’s food industry, at some point soon it has to reveal its impact on the salmon season. Both the farmed seafood industry and the local fishing fleet have already been hard-hit by the Bay Area shelter in place order since last month, which forced many restaurants that purchase wild fish fresh from the boats to either close or pivot to takeout and to-go service. Without that vital distribution point, salmon fishermen are pinning their hopes on grocery stores and local markets.

“The key thing will be figuring out how do reach all of these consumers now, in ways we may not have before. It will be hard at first trying to get the lay of the land,” said David Goldenberg, the executive director of the Salmon Council, which represents the marketing interests of the state’s commercial salmon fishermen. “We’re in uncharted territory.”

After the season begins today, fish will begin arriving on the docks Monday or Tuesday. Starting May 6, commercial fishermen can fish salmon as far north as Point Arena (Mendocino County) on and off until September 30, with some closed periods in between. The commercial salmon season can normally generate upward of $100 million per year in sales.

Commercial fishermen are confident the demand for salmon is there could even grow in the coming months. The reason: rumors of a looming protein shortage in the U.S.

The U.S. food supply chain became a mainstream topic of conversation recently as a growing number of meat processing plants shut down temporarily due to coronavirus outbreaks in their respective workforce. While industry experts don’t expect a massive meat shortage, they think meat prices could go up in the coming weeks.

Larry Collins of the San Francisco Community Fishing Association said changes to the meat supply could be a boon to the salmon industry, especially since restaurants, which he said previously bought 60 percent of salmon catches in the Bay Area, are closing or have limited service and fewer customers.

“My crystal ball is broken,” said Collins, who also is a board member of the California Salmon Council. He also said though it’s too early to determine potential price points for salmon in stores and restaurants, the large amount of fish set to come in this season could result in affordable prices for consumers. “But since the prices are going to be reasonable this year I think, hopefully people just go out and get it.”

Fish processor Ronald Black works through a haul of salmon from the Pacific Sea fishing boat out of Eureka while on the dock of Pier 45 at Fisherman’s Wharf. 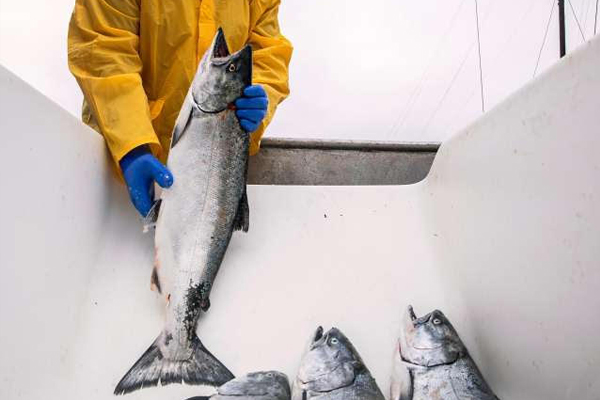 Aside from influencing the wholesale and retail markets, the coronavirus pandemic has forced members of the San Francisco fishing fleet like Sarah Bates to think about safety measures related to social distancing and wearing masks while out on the water, though she personally operates her boat alone during the commercial salmon season.

“These are small boats most of us are working on, so if one has two or three people, they should treat it like a family where you’re sheltering in place together,” she said. “There’s no way you would be able to keep sufficient distance from each other. It’s all just extra things to think about.”

The recreational salmon season also begins today for most of the California coast. It is slated to run until Nov. 8 in the Bay Area and through Oct. 4 in Monterey Bay and farther south. The season was initially set to begin in April, but was pushed back by the Pacific Fisheries Management Council last month over concerns about the potential dangers from the COVID-19 pandemic.

The unpredictability of this year’s commercial salmon season follows a tumultuous 2019-20 commercial Dungeness crab season that was delayed until Dec. 15, which caused fishermen to miss a lucrative opportunity to sell crabs to locals for Thanksgiving. The Dungeness crab fishing industry, which can generate upward of $95 million in a good year, has lost millions over the last few years as seasons have been shortened by the presence of domoic acid, a neurotoxin poisonous to humans, and whale entanglements.

California state officials are ordering an early end to the Dungeness crab season this year as well, to protect migrating whales from entanglements. Some California crabbers are protesting the decision.

In the days leading up to the season opening, Bates said fishermen were just concerning themselves with the things they could control — bringing ice to boats for fish storage, last-minute painting, and cleaning. The coronavirus has made the salmon market complicated, she said, but dealing with uncertainty just requires keeping the right perspective.

“Our job isn’t to sell fish. We just have to catch fish,” she said. “And that’s all most of us are thinking about right now.”